So let’s dig into some mobile-specific data. For starters, there are 3.65 billion unique global mobile users.

There are nearly double that number in mobile subscriptions worldwide (7 billion), but if I were to hazard a guess, I suspect that the distribution of those 7 billion is driven by the Pareto principle better known as the “80-20 rule.”

What this means is that 80% of the 3.4 billion subscriptions that aren’t attributed to individuals are probably owned by 20% of the population. My family, as a focus group of one, for instance, has seven subscriptions total — four smartphones and three iPads.

More important to know out of the billions of global mobile users and subscriptions is that 1.91 billion of those have smartphones.

eMarketer predicts that number will reach 2 billion by next year and that by 2018, half of the world’s mobile users will have a smartphone.
Currently, 500 million of these smartphones users are in the most populous country in the world (China).

The U.S. is a distant second at just under 200 million.

The reason this is important for marketers to know is that while SMS or text campaigns are still effective, they are the only way to connect with non-smartphone users (other than via voice call) on most feature phones. For developing countries, or those with low smartphone penetration, marketers should either consider using SMS or other more traditional marketing tactics.

So what are all those smartphone users doing? For one, they are spending a lot of time on social media. In fact, there are nearly as many active mobile social accounts in the world — 1.68 billion — as there are smartphones, according to a recent global digital snapshot published by We Are Social. This number is led by global phenomenon WeChat, with Facebook a close second.

And while organic social media activity has started to diminish in effectiveness for brands, paid social is more powerful than ever. This is a great way to target mobile users, especially the younger ones. 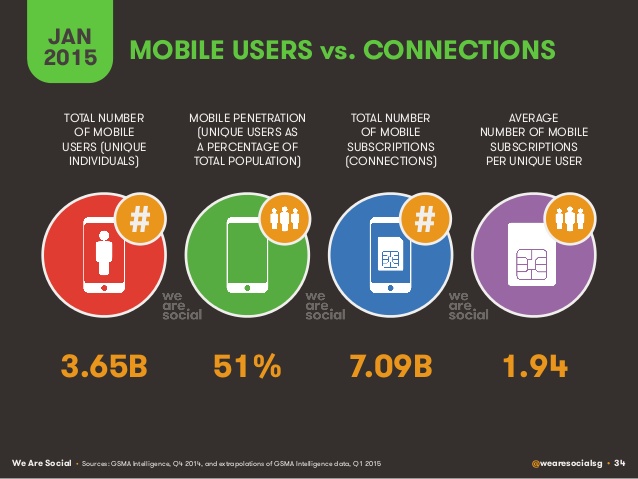